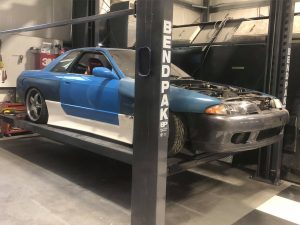 The Nissan Skyline (Japanese: 日産・スカイライン Nissan Sukairain) is an automobile nameplate originally produced by the Prince Motor Company starting in 1957, and then by Nissan after the two companies merged in 1967. After the merger, the Skyline and its larger counterpart, the Nissan Gloria, were sold in Japan at dealership sales channels called Nissan Prince Shop.

The Skyline was largely designed and engineered by Shinichiro Sakurai from inception, and he remained a chief influence of the car until his death in 2011.

Skylines are available in either coupe, or sedan body styles, plus station wagon, crossover, convertible and pickup/sedan delivery body styles. The later models are most commonly known by their trademark round brake and tail lights (as of 1972). While not distributed in the United States until its importation as the Infiniti G, the Skyline’s prominence in video games, movies and magazines resulted in many such cars being imported there from 1989 to late 2005.[1] The majority of Skyline models are rear-wheel drive, with four-wheel drive being available since the eighth-generation’s debut.

The eleventh-generation Skyline (V35) was another major turning point for the nameplate, as it dropped some of the previous generation Skyline’s trademark characteristics such as the straight-six engine (replaced with a V6) and turbocharging, and eventually separated the GT-R into its own line. Nissan decided to retain the Skyline for the luxury-sport market, while its platform-mate, the 350Z, revived the Z line of pure sports cars.[2] The V35 was the first Skyline made for export to North America, being sold under Nissan’s luxury marque Infiniti as the G35 in 2002. The Skyline (V36/J50) is sold in Europe, North America, South Korea, Taiwan, and the Middle East as the Infiniti G37.

On April 12, 2010 a Guinness Book of Records event took place with 225 Skylines taking part in a parade lap at the ISTS at Silverstone UK, which produced two world records: the most recorded Nissan Skylines at one meet at one time, and Most Nissan Skylines on a track at the same time. 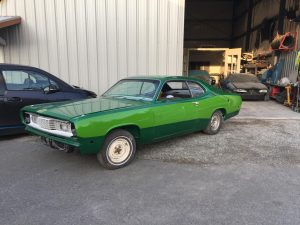 The original Plymouth Duster is a semi-fastback two-door coupe version of the compact-sized Plymouth Valiant automobile that was marketed by Plymouth in the U.S. from 1970 to 1976 model years.

The Duster coupe provided the compact-sized Plymouth Valiant with a sporty body style to attract customers.[5] The car was a $15 million effort to update the compact Valiant for the 1970 model year.[6] The Valiant badge appeared only on the first model year Dusters, and continued to be used on all the companion 4-door sedan and 2-door Valiant Scamp hardtop models. The Duster was built on the Valiant platform and shared the same front end sheet metal, but featured a different design from the cowl back.

The Duster was also positioned to compete with Ford’s slightly smaller semi-fastback Maverick compact car and the AMC Hornet that were both also introduced in 1970, and the slightly larger semi-fastback Chevrolet Nova whose design was introduced in 1968.[2] While the Maverick and Nova were offered in a 4-door sedan body style, the Duster nameplate was used only for the 2-door coupe. The Duster was also marketed as an alternative to the original Volkswagen Beetle, as well as the new class of domestic subcompact cars such as the Chevrolet Vega.[6][7][8]

Duster logo was, and still remains, one of the most recognizable automobile logos. Chrysler employee, Thomas Bertsch (1952-1987), created the “twister” logo and font. Many corresponding graphics were used for different trim packages over the years. Bertsch was the director of the interior styling and design studio for much of his career..